A SATIRICAL LOOK AT POLITICS AND CULTURE

With White House mini-scandals arriving on a daily basis, Gridiron writers often had to look away from the national dumpster fire to find funny ideas from what seem relatively sane politics and cultural shifts of the state and regional level. 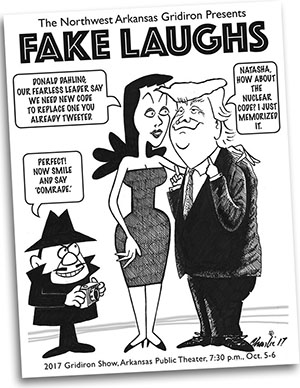 “Translating Trump’s Tweets” ♫
It takes a village of reporters

When a stoplight comes to Madison County, getting from the Huntsville square to yonder mountain will require perfessional help. And a Mason jar full of some clear liquid.

What if Dos Equis had cast a different entertainer as its most interesting man?

“Ganja Get Me Some Meds”
Dr. Sativa at your service

The disfunctional cast of characters in the White House exchange ideas in passing. Let the leaks begin.

“The Revolution Has Been Passed On”
Grab your pussy-hats and placards!

Be careful what you protest for, you just might get it.

“Give Me Your Tired, Your Green …”
ICE, ICE Lady

Immigration agents stop the Statue of Liberty dead in her tracks and want to know how she arrived in America.

A little kerfuffle among young concert-goers at the Arkansas Music Pavilion earlier this year prompted Gridiron writers to wonder whether an older, wiser crowd could be drawn into rushing the stage.

We get allergic hearing “Hey!”

“A Radio Bo-mance”
No homerism here!

Callers to Bo Mattingly’s show want to wrap up a stinky Razorback season as quickly as possible.

It Was 50 Years Ago Today — OMG!” ♫
Seems like the Arkansas GOP has been in charge that long

The Arkansas Secretary of State’s decision to send the voting records of all Arkansans to the Trump administration, the Feds file corruption charges against a couple of legislators related to the religious Ecclesia College, Charlie Collins’ conceal-carry gun bill passes muster, and Jason Rapert looks to rebuild a monument to the 10 commandments. These aren’t strawberry fields.

The senior Gridiron correspondents bring you all the news Breitbart missed.

“Tricky Russians on the Loose” ♫
Tapping into Hillary’s loss

“A Bypass to Nowhere”
The road less traveled — like, hardly at all!

It’s easy for these tourists to mistake their route as the best bike path to Missouri.

If at first you don’t succeed at killing Obamacare, Republican senators will make sure you never succeed.

“Where Ya’ Gonna Pee?”
Bathroom bills make for tough going

If Arkansas really wants to confuse the bathroom issue, they need to legislate Spotify and really sort out the differences between all of us.

“Tomorrow Belongs to Angela” ♫
It might have been Hillary’s but…

The leader of the free world turns out to live in Germany.

The boom in murals being painted on the exterior of buildings in Northwest Arkansas will never run out of large-scale ideas if the Gridiron writers have their way.

As the climate begins shifting, the Stufflebeams wonder who can cool down Mother Nature’s hot flash.

“The Un-Welcome Wagon” ♫
Visit, spend your money, have a good time — then leave!

Northwest Arkansas gets ranked high on another list: regions that like visitors who know when to go home.

“Bunderwoman!”
Making a difference in Bentonville

Blunderwoman interviews potential superheroes who can leap the hillbilly image in a single bound and are more powerful than a backwoods cliche. Costumes now being issued.

When the Mississippi coach Hugh Freeze blamed recruiting violations on his predecessor, Houston Nutt, you had to know that texting would enter the picture.

“We Wanna See You Fired” ♫
And the list goes on

The controversial touchstones of the Trump administration’s first 260 days could fill the Oxford English dictionary, but we squeezed them into one anthem.

The whole cast and caboodle